VicNibbler is now available on a real Commodore Vic 20 cartridge!

There's an active scene and interest in retro 8-bit and 16-bit development that has been flourishing in the last few years, and for some it has never gone away.  Inspired by some of my friends who have recently been making new 8-bit games for long retired computers, I decided to have a go myself and VicNibbler for the Commodore Vic 20 (+3K RAM expansion) is the end result.

VicNibbler is based upon an old arcade game simply called Nibbler.  It can best be described as a frantic cross between Snake and Pacman.  Nibbler, the snake, slides through the maze, automatically turning at corners and waiting at junctions.  Just don't wait too long, there is a timer which is how hungry Nibbler is, and if you don't keep eating it will tumble down much more quickly!

The Vic 20 version was created in it's likeness.  There are similar mazes, although to fit in 6K of RAM only some are present and the general gameplay and speed has made it across to the humble 8-bit computer.

I created it with a wonderful tool called Turbo Rascal, for Windows, OSX and Linux.  It is a Pascal-like language that is designed at a low level producing assembly code for the target 8-bit (and some 16-bit) computer.

There is a very friendly community building up around Turbo Rascal and while writing Nibbler I helped to improve support for the Vic-20 (and other 8-bit platforms), find and squash bugs and expand the help and information greatly.

It's now even easier to get started, so if you feel inspired to create something for your favourite 8-bit computer, now would be an ideal time to jump in and have a go.  The creator of Turbo Rascal is always looking for people to help expand the tool, especially if you have in interest in boosting support for a particular platform.  Currently the Vic 20, Commodore 64 and Plus/4 are getting the most attention, but there's also support for the Pet, NES, BBC and even Amiga.

I was recently contacted by the people behind The Future was 8 bit (TFW8B), an enthusiastic bunch of 8-bit retro heads who have been making hardware for many 8-bit systems for some time now.  If you are a retro collector, you may have already come across them.   They were the first to bring the SD2IEC drives to the masses and are also the company behind the Penultimate+ cartridge for the Vic 20.

They asked if they could put VicNibbler onto a cartridge and today, the game is available to buy from their website. 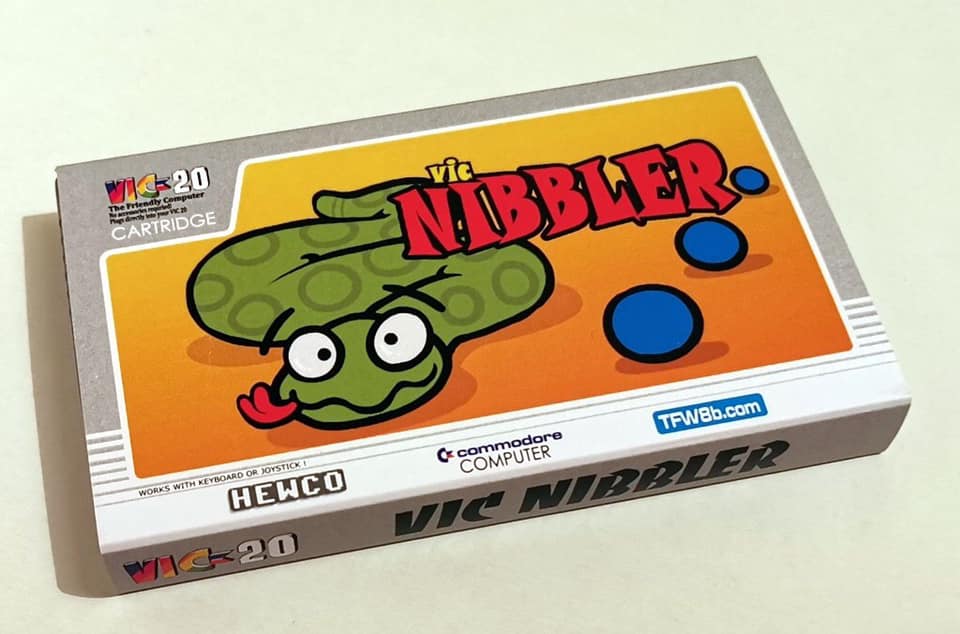 This is so exciting.  Like many of my peers, I've always had a desire to release an actual game back in the day - just funny it has happened nearly 40 years later but better late than never :)

If you feel inspired to create your own 8-bit game with Turbo Rascal or your favourite tool of choice and want to see it released on cartridge,  TFW8B can do that for you.  Just don't expect to get rich as it is just for the fun of it.  TFW8B will cover the costs of creating the cartridges, printing the labels and handling the distribution.  You'll get the pleasure of some cartridges and become part of a growing community who can enjoy your game on real hardware.  If you want more than fame and kudos you may need to look elsewhere :)

Take a look at the games available to buy now on their £9.99 ragne range for the Vic 20 and Commodore 64.